(redundant content for google)
Headline: Romney Continues His Appeals to Decency and Higher Authority
“Anderson, my opponents don’t have the delegate math.”
“Anderson, the math is against them!”
“Anderson!… Anderson!”
Scene from Deliverance, you know the one: “Anderson Cooper can’t help you round here!”
Romney (to himself and the voters): “Oh dear, strange things are happening to me!”
Redneck #2: “Not in Ol’ Missibama… Ever been Newted? Ever been Santorumed?”
Romney: “Only in business, ha ha ha, that’s a joke…”

New Headline: MITT ROMNEY: He’s got a real purty mouth! I mean, he’s got all the right numbers!

Romney: “If only people would focus–I’m already the President of the United Focus Groups of America, why not this place?”

Sub-head: Romney: Stranger things have happened to me!

Because the best VP has got to be the one that looks just like you!

At the exploratory committee:

Jerry:  It’ll be a campaign about nothing!

Jerry:  Nothing!  Everyone’s campaigning about something, ours will be a campaign about nothing!

Rick:  And Romney becomes our butler?

Jerry:  Secretary of the treasury.

Rick:  I could see that. And what about Kramer, I mean Gingrich?

Rick:  The ambassador to wherever he wants to promote his coffee-table books.

Say what you want about Newt Gingrich, but it’s obvious that his wife Callista would make the best First Lady:  because she’s cool with it!  Think of the slogans:  Callista’s Down With It!  Party on with Newt and Callista! 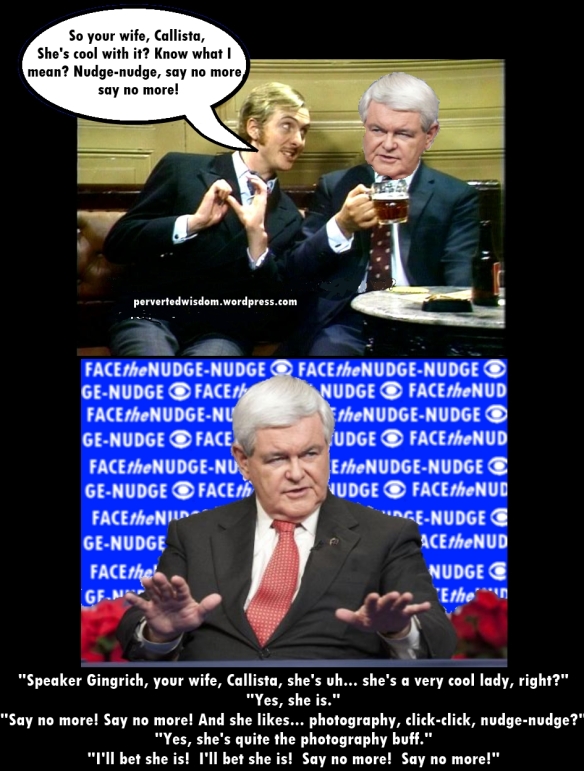 The failure of both Huntsman and Romney to win the allegience of fellow Republicans on a national scale should convince the Mormon Church of two important lessons:

1.  You will always find more acceptance among the liberal, left-wing “humanist” types than you will among the Christian Right. So give them up.

2.  Stop producing robotic, Steptford Dudes in your power heirarchies. Abandon whatever it is that’s churning out these android clones. Even the good-natured Harry Reid (D-NV) is a little too droidish. Perhaps there is a psychological cost to the dogmatic repetition of socially shared core beliefs which constitutes at least part of every Mormon meeting, even volleyball games.