(With some terrestrial comments)

• Earthling sidles up to the Bar. He’s asked if he wants the Fruit of Knowledge or the Fruit of Life. “Neither,” he says, ”my science says they don’t exist and my religion forbids me from partaking.”

• Earthlings are smart. At the latest Interstellar Science Conference, Neil deGrasse Tyson proved the conference didn’t exist. Very persuasive fellow. Lots of gravitas. We gave him a silent ovation out of politeness.

“But I’m a robot. My companion, however, is fully submersible and plagued with glitches.”

~ ”They want our highly inefficient labor!”

~ ”They want our precious DNA we shed everywhere.”

~ ”They want our precious sperm we cast about.”

~ ”If you build it they will come. And if we build it big enough we can defeat them and take their technology and kill them all!”

• Do you ever wonder why God created such a vast universe with so many different forms of life just to be a backdrop and supporting cast for Great Story of Earth and Humanity?

No? Then you must not be from around here.

(That’s it, just the word bullets by itself is some kind of inside joke to them or a dismissive term similar to our “bullshit.” My best guess is that ”bullets” means any vain stupid thing or idea that makes you feel strong and right but really doesn’t mean shit and actually makes you an asshole for thinking it does.)

• Earthlings long to explore space and not find anything better lest they be unable to kill it. Nothing is more disturbing to them than something they can’t kill.

• They say a bad alien is one who frightens them that they are living wrong and need to adhere to the highest ethical codes of their religions, philosophies, and science, and that a good alien is one who secretly gives them technology to help them kill their enemies and their planet.

If you follow the Pat Robertson-Jerry Falwell line of thinking, whereby natural disasters such as Hurricane Katrina were somehow the result of anti-God lifestyles incurring the wrath of God (raging against New Orleans culture I suppose), then the following maps from FEMA and NOAA and various other respected sources prove–

He hates their districts, he hates their states, he probably even hates their pets more, although I don’t have the data maps to prove that one (YET!). But I’m sure a map of pet mortality, abandonment, fighting injuries, etc, would be heavily biased towards the red states, especially Dixie.

Start with the best–this is from NOAA:

Lop off everything west of Minnesota and Texas and you have a map of the Civil War! West Virginia did well to go their separate way.  The above map indicates that even if God doesn’t hate Southern Man as much as Neil Young, at the very least Thor does.

Now here are two maps of red states vs. blue states from Wikipedia:(bear in mind Florida is MUCH more “red”/conservative than these maps indicate, and probably Missouri too but I don’t know it’s hard to tell from 30,000 feet)

A map of the average margins of victory in the past five presidential elections
Author: Semocrat08 at en.wikipedia 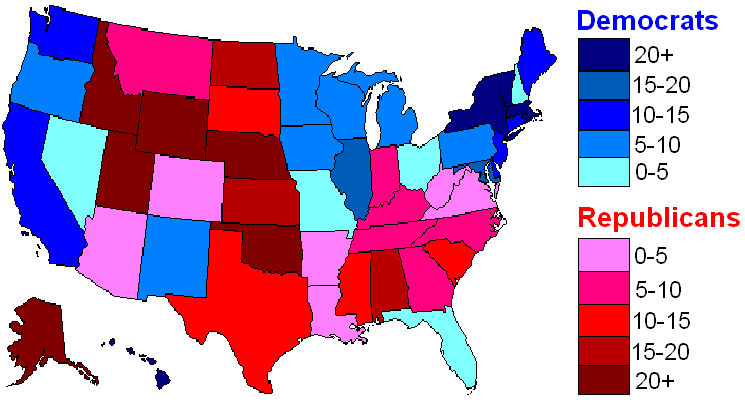 Here’s another way to define who’s red and who’s blue: 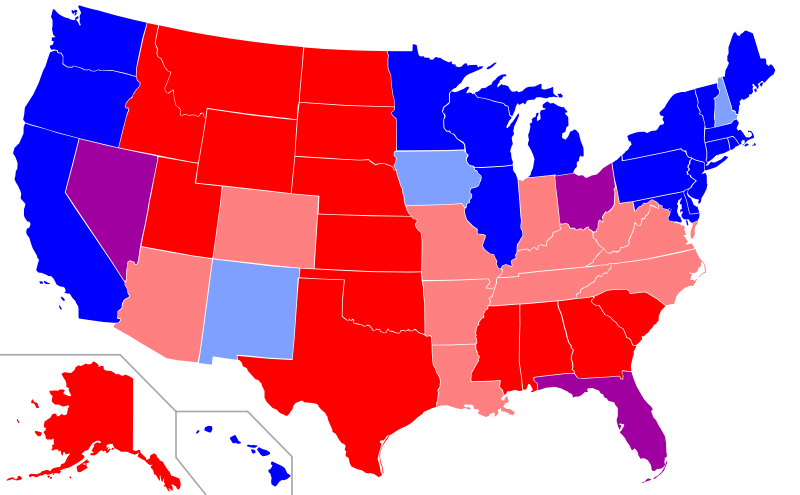 With these red state vs. blue state maps in mind, look at the following maps of God’s Wrath recently wrought upon the United States:

from the New Scientist website (their motto: “Fuck those old scientists”). This map documents more than just Thor’s handiwork:

Note how the red part of New York State (upstate but not Buffalo) is afflicted, while all around all the liberal areas seem to enjoy the tranquility of God’s Protection. Compare eastern (liberal) Pennsylvania with western (conservative) PA.  Naturally, liberal-but-slightly-disasterous Vermont is an underperformer in everything except small unit tactics.

As much as even I, a New Florid-Yorkian, hate to say it, the above map clearly shows where God’s love is the strongest–liberal Massachusetts and Connecticut.

Hmm, makes you wanna NOT think about it! Makes you wanna distract yourself away from the obvious fact that–Ok, here’s another map:
Map of General Mortality Rates by County (also from the New Groovy Scientist Man):

So the conclusion is inescapable: God hates the Republican “red” states.