“Anyone who doesn’t meditate is a fucking asshole,” my father once said, neatly encapsulating his unique blend of spiritual transcendence and earthbound bitterness.

This led to decades of inside-jokes between my brother and I:

“Yeah, that about proves it.”

On another occasion, I jokingly interrupted my brother when he was commenting on how pathetic it was that Carlos Castaneda (an anthropology graduate student and best-selling author who claimed to have been apprenticed to a Native American shaman in the early 60s) had boiled down his previously mystical shamanic teachings into a lame system of spiritual calisthenics he called “Tensegrity”–all in an attempt to appeal to the California New Age/health scene of the late 70s:

“Look man, anyone who doesn’t practice Tensegrity is a fucking asshole.” 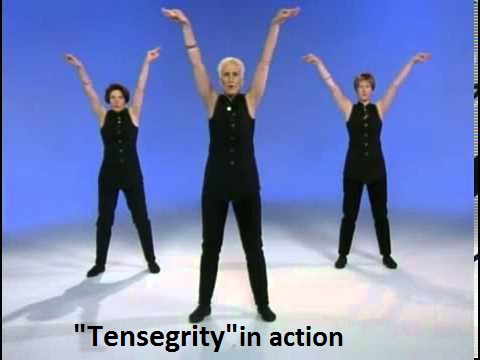 And while it’s hard to imagine the Buddha or the Dali Lama making such a negative pronouncement against non-meditators, it’s actually quite logical to see my father’s aphorism as the necessary converse of their teachings. After all, if there really is a Path of Enlightenment available to everyone, wouldn’t anyone who spurned such a Path be, in fact, well, you know, a fucking asshole?

The supposedly great monotheistic religions of Judaism, Christianity and Islam never had a problem openly stating the converse of their divine dispensations–“Anyone who doesn’t pray [to the right God in the right way] is going to Hell.”  Substitute “Effin’ A” for “going to Hell” and you basically have my father’s credo.  If anything, my father’s credo is less condemnatory–rather than an eternity of torture and suffering, wouldn’t you rather just be an asshole instead? I know I would; and I practice that every day.

Perhaps the Eastern religions and their New Age revamps in the West could learn a thing or two from my father’s more condemnatory attitude. No, you don’t need to go Medieval and threaten non-practitioners with Hell as the monotheists do (or used to), but what’s the harm in openly specifying that if you’re not seeking some kind of Enlightenment, you’re probably just an asshole? Is that not the yin of the yang? 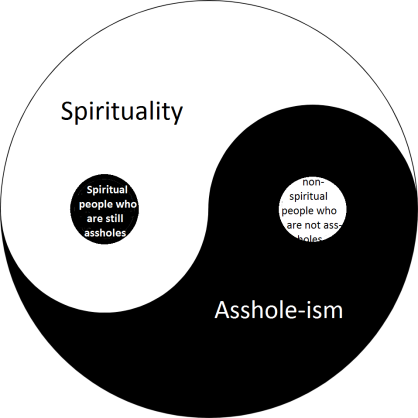 Madison Avenue’s most successful distillation of the New Age ethos of the 1970s was expressed in the now-famous Coca-Cola ad with the catchy jingle “I’d Like to Buy the World a Coke.” Let us rephrase that anthem of togetherness with lyrics inspired by the perverse wisdom of my father: 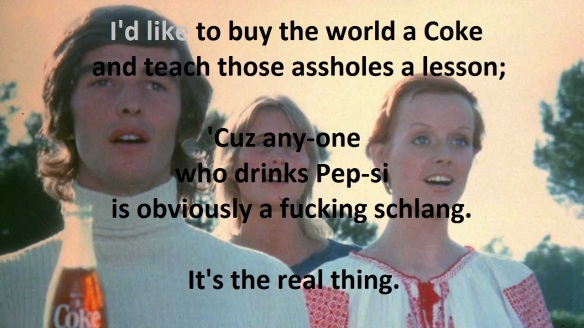