In a secret, naughty corner of the Library of Congress where the archivists will make out with you if you catch them in a good mood, there is a collection of pornographic material collected from various US presidents after they left office or by their mother when they were outdoors, however briefly.

George Washington:  used to read The Song of Solomon from the Bible to get himself in the mood to bang Martha.  His favorite part was Chapter 7, despite all the mixed metaphors:

“Thy two breasts are like two young roes that are twins…This thy stature is like to a palm tree, and thy breasts to clusters of grapes.  I said, I will up to the palm tree, I will take hold of the boughs thereof:  now also thy breasts shall be as clusters of the vine…”

Abraham Lincoln:  had an advance copy of Mandingo. A very advanced copy! He wrote it. 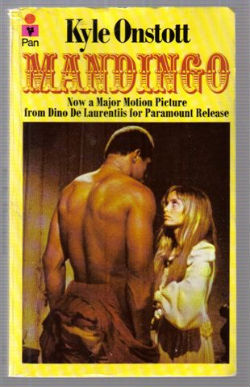 “Honey, why are these pages stuck together?”

“Shut up, bitch.”  A lesser man would have crumbled!

Here’s where presidential biographies can be really instructive to future generations of young wives and mothers:  if you find the pages of a magazine stuck together, unless it’s American Girl Doll catalogues or autopsy photos, you’re better off not even mentioning it.

Franklin Delano Roosevelt:  After he died, they found this in his desk:

(from www.Streetsie.com, which calls itself “The Mad Spaz Club: where all the cool wheelchair people hang out.”)

John F. Kennedy:  Secret 16mm films by Zapruder’s shrewder tutor, Judah Hoffengruber, of JFK banging Marilyn, a couple interns, some friends’ wives, some high-class hookers, and a really good-looking gay guy when JFK’s back-pain medicine interacted with “some” alcohol, making the whole episode a “pharmaceutically gay” encounter, and not actual gay sex. Technically… It just looks like gay sex, although, in his defense, JFK did manage to stay on top throughout most of it.

Richard Nixon: had the first ever looped video clip for pornographic or prurient interest: Goldie Hawn in her underwear-outfit-thing from Laugh-In saying “Sock it to me!” over and over, sometimes in slow motion.  Presidential vignette from tape #230,580 of the not-so-secret presidential recordings:

“Henry, can the people at State superimpose a picture of say, a cucumber, on the part where Goldie says ‘Me!”

“Henry, could you speak into the microphone of history when you talk?  And could you drop the extra thick German accent you use in your public schtick–is that the word–schtick?”

Jimmy Carter:  Gave an interview to Playboy just so he could have an excuse to have a copy of Playboy laying around the bedroom night table.  Hefner repayed Carter by having an extra fine centerfold model that month.  Presidential vignette: 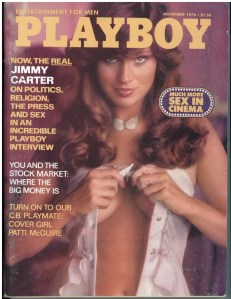 Bill Clinton:   Life-long subscriber to Butterface Magazine. When feeling extra skanky, he would check out the pages of If It Moves. The poor man–little does he realize that all of his paramours and all of his conquests and all of his cleaning ladies have saved ALL of his semen stains, even the paper towels, and that Julian Assange is teaming up with Linda Tripp to dump all 700,000 of them into the public domain, which is where Bill likes to circulate his stuff anyway. Did I start that sentence with “poor Bill”? As usual, I meant poor Hillary.

George H. W. Bush (1988-1992):  Looped clip of a young Condoleezza Rice accidentally referring to Bush (senior) as her daddy.  Presidential vignette:  “Ohhhhhhhhh, this is not going to be (grunt) PRUDENT!!! …ahh…” 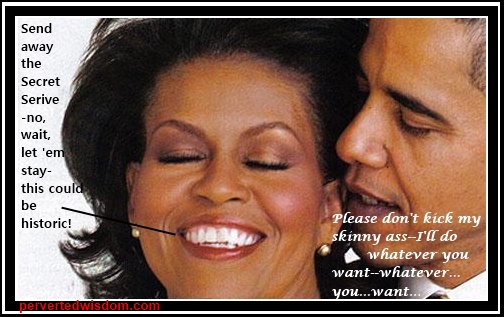 And of course Mandingo. 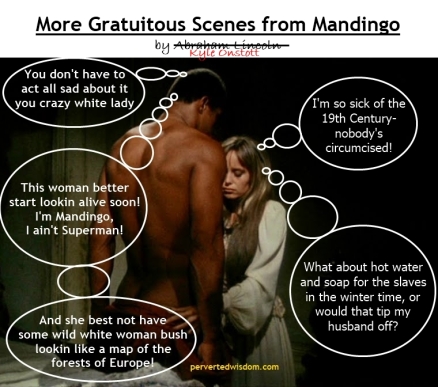