A great social dichotomy that has not yet been studied by the social psychologists who appear on TV is that between The Office and The Field. They are different mindsets, different worlds, each with their own special ethos.

Generally speaking, as technology increases, we are all being moved from the Field into the fucking Office.  So learn up:

The Field:  everyone knows everything and no one gives a shit unless it’s a real problem

The Office:  social information, personal appearance and social alliances are almost as important as job performance; consequently, these remain active concerns of the mind even when home not working

The Field:  a simple credo of maximum sustainable productivity during work-time and maximum chilling out when not; bulldozing, for instance, does not remain a concern when home or at the bar

The Office:  Grouse and complain behind the back of supervision about their bad ideas and last for twenty years at the job, with promotions, benefits, etc.

The Field:  Stand up and tell the boss he’s fucked and get fired.  Then work for the same guy a couple years later after you both learn better

The Office:  small events are imbued with excessive amounts of social significance

The Field:  crazy shit is par for the course and thus no big whoop

The Office:  totem animal = the weasel

The Field:  totem animal = the ass—cuz you’re either sittin’ on it or bustin’ it 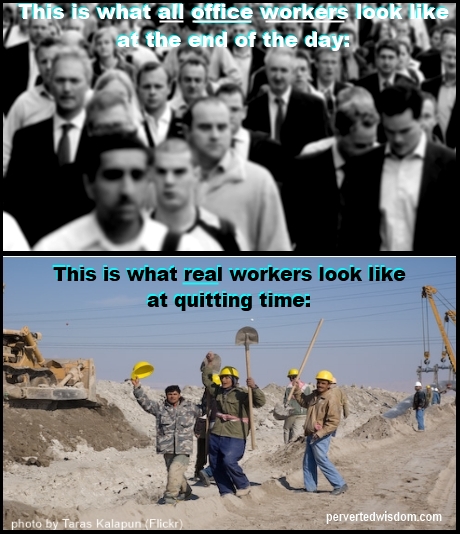 1 thought on “Our Greatest Divide: The Office versus The Field”