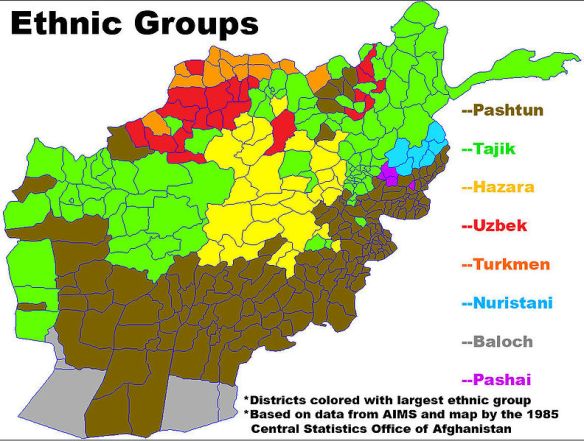 map from wikipedia where else

The Pashtun get their own country in southern and eastern Afghanistan AND a good part of Pakistan.

Pakistan, in turn, gets whichever parts of Kashmir that vote to leave India and join Pakistan in a special election (with say a 60% threshhold per district).

*I was not in favor of partition in Iraq because the non-Kurdish Sunni in the middle of the country have no resources to share.  Afghanistan, it seems, IS FULL OF RESOURCES! About a trillion, including rare earth minerals. 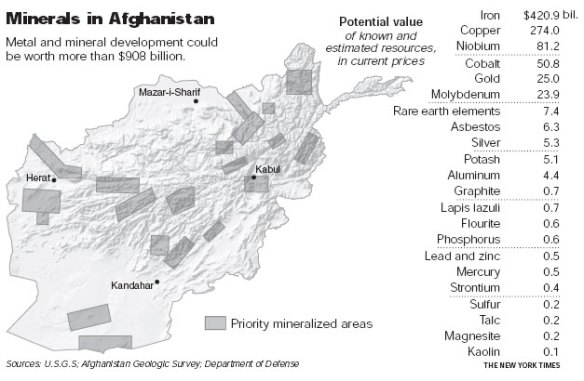 You might think the Uzbek and the Hazara would be resouce-poor like the Sunni in Iraq, but apparently where there’s not minerals, there’s gas and oil–from the wise sages of gasandoil.com back in 2003, almost a decade ago:

Afghanistan might be one of the poorest countries in the world after 23 years of devastating war. However, its rugged terrain still houses probably some of the most precious wealth on Earth.
While the transitional government in Kabul cries for donor aid for the daunting post-war reconstruction, experts say that the abundant mineral resources throughout the country could contribute to the recovery of its war-torn economy if exploited properly… (link for full article  http://www.gasandoil.com/news/russia/8cee72bd920d620c06c43abaf7ad3b5f )

The point is, the widespread abundance of resources throughout Afghanistan should make it especially suitable for peacable partition.