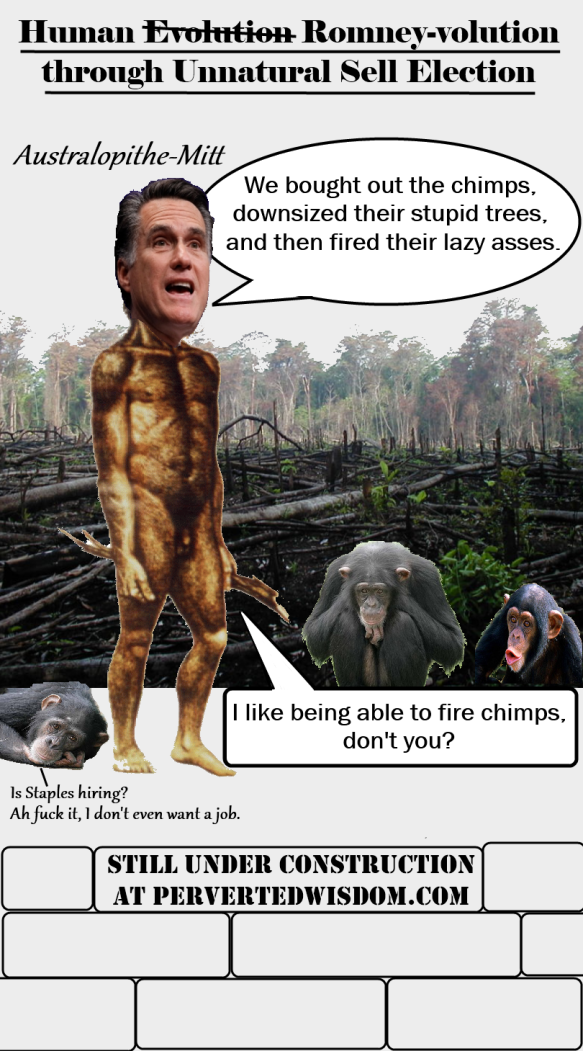 [pics of Romney’s head atop archetypical specimens from human evolution]

Australopithemitt:
We bought out the chimps, downsized their stupid trees, and then fired their lazy asses. I love being able to fire chimps, don’t you?

Not-Homo-at-All Mittwreckedus:
You can’t blame us for outcompeting the Australopithemitts, we all ran out of chimps.

Archaic Homo (ok a little) Sapiens:
All we’ve done is take the competitve spirit of our ancestors and applied it to our cousins, the Homo Mittwreckedus–
“Not homo! At all!”
Ok, not homo, just pretty-mouthed.
“Hey!”

Eurasian side-shoot: the Mittromneythals:
Our early pioneer ancestors came out of the fertile plains of Asia Minor into the wild wastes of Europe and said This is the place! That’s an inside joke, ha ha ha…

Fully Modern Romneyman:
I’m not gonna apologize for my wealth. And since wealth requires poor people to work for it, I’m not going to apologize for anyone’s poverty either.
I’m also not going to apologize for America. What trail of tears? What Mormon persecutions? America has nothing to be sorry for the way it treated Mormons, Indians, blacks, women, nothing at all–just ask Sean Hannity–actually, I’ll have my people have him ask me that himself when I do my only interview later next month…

Next stop: Romneybots vs. Mittdroids in the Giant Waste of Galactic Resources in Pointless Pursuit of Galactic Dominance Over Resources!