This just in:  the Gutenberg Revolution is finally OVER! Now we can go back to the Medieval superstitions that made us great.

And speaking of Medieval, it’s official: John Paul I (1978-1978) was a do-nothing Pope. His plaque can be found in the Basement Corridor of Great Do-Nothing leaders along with William Henry Harrison (1841-1841), James Garfield (1881-1881) and that four-year-old Pharoah kid [reference needed].

I liked Gabi Giffords more after she got shot. I liked John Paul II more after he got shot too. I even liked Reagan more when he caught one. We all did.
They missed Ford three times and no one liked him any the more for it.
So it’s obvious that getting shot makes people more likeable. But true love is for the dead, especially for those intolerable fuckers known as artists.
Therefore, I think I could be cured of my misanthropy if everyone just got shot.
And if everyone died, I’d probably miss you bastards (and bitches, can’t be sexist) 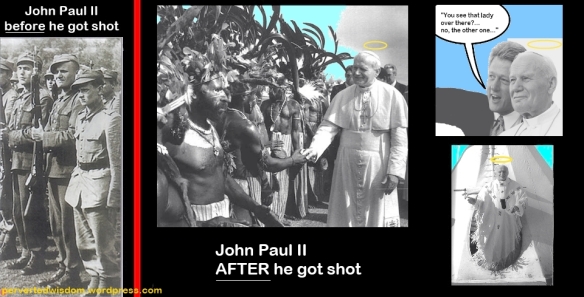 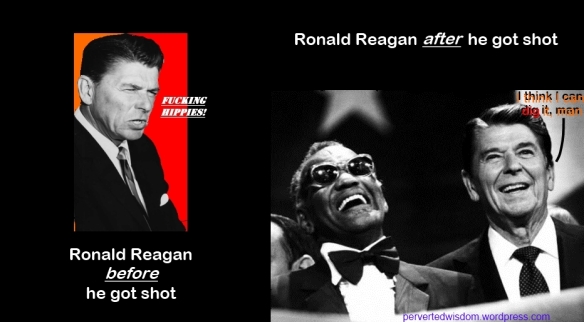 Oh, but wait, I didn’t appreciate George Harrison any more after he got stabbed, especially since he yelled out Hare Krishna to repulse the attacker (it had repulsed everyone else).
So unless getting stabbed is less popular than getting shot, that ruins my theory.
The fuckin’ Beatles ruin everything! First they ruin the idyllic 50’s by popularizing the 60’s counter-culture, then they ruin the 60’s by going anti-Revolution in 1968, then they ruin the 70’s by being either so cheesy or so alienated that they were unable to thwart the onset of Disco and Studio Rock.
And I had to grow up under that crap!
Now they ruin my theory…
Of course, I’m still not a fan of Bin Laden even after he got shot and killed in advance of his trial, so maybe my theory sucks ass. Edit delete?
That’s the thing about people–you just can’t generalize about them, generally speaking.
Except those fucking Beatles. 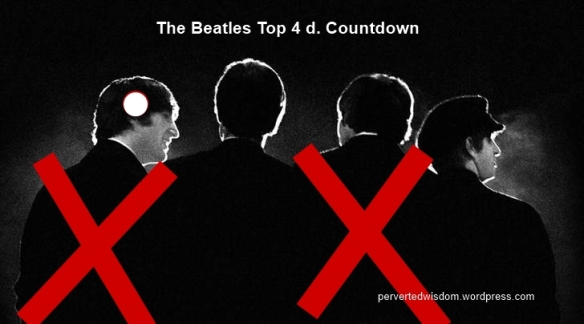